We use cookies on our website. They help us get to know you a little and how you use our website. This helps us provide a more valuable and tailored experience for you and others.

You can revoke cookies at anytime at the bottom of the page.

The moment before the pose

PrimaDonna, the Belgian lingerie label for women with full breasts, and French director Sophie Brafman joined forces to put into pictures exactly what beauty means to them. Among other things, they recorded what happens in the build up to the photo shoot and behind the scenes, the moment before the pose. Pure nature and without the models – three women of different ages with different body shapes – being aware of the camera. In doing so they show that beauty and seduction are within every one of us. Irrespective of dress size or age.

That love of pure nature is in PrimaDonna’s DNA. From the refreshing Happiness sets, by way of Divine’s pure lace, to the legendary Deauville bra: each of them give the very best support to large breasts and show natural feminine curves at their very best. Because beautiful lingerie helps you be proud of your body and face life full of confidence. And PrimaDonna wants to keep helping women do that, every single day. With a lingerie collection that is no less than an ode to curves.

“I’ve worked with a lot of women – models, stylists, make-up artists, photographers – which I have time to observe. The make-up artist unpacking her brushes; the model in her curlers tapping away on her smartphone; the photographer setting up her lights on the set… We started from this group photograph in the moments beforehand, when the women have stopped performing or acting. When they simply are.

It is very common to film a making-of, showing what happens behind the scenes of the photo shoot, which is considered to be the culmination of the day. Here the reverse is true – the shoot is a way in to show what you normally do not see. The moments before the pose is struck, which would appear to be lacking in anything interesting but is actually full of performance.

The casting choices were essential. It’s not easy to shoot a 68 year old grandmother in a body, but Eva’s joy, charm and beauty turned it into something natural. Clémentine, a buxom model and muse who radiates the energy of a sun, or Sarah, more youthful, who allows herself to be caught playing in the Garden of Eden! All of them dropped their guard, acting naturally in front of the camera, without too much posing or performance.

Godard said: “Photography is truth. The cinema is truth twenty-four times per second.”  In an era of slow motion you could say that video is truth at hundreds of times a second… We have decided to retain only a few of this multitude of images to capture the essence.

PrimaDonna respects women’s bodies and celebrates their curves without any special treatment. The aesthetics of the brand is natural, gentle, far from the sexist clichés of some lingerie labels. It was such an obvious decision for me to answer their call for this film. Because we are on the same wavelength, that is femininity and rediscovered freedom.” 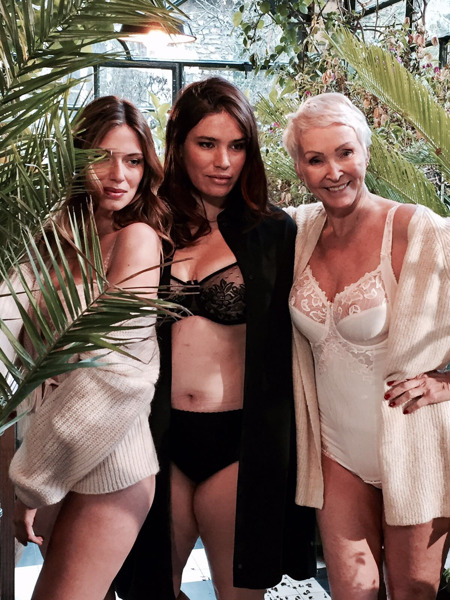 Since its formation in 1865, PrimaDonna has designed luxury lingerie with a clear goal in mind: ensuring women with feminine curves and full breasts enjoy the very best fit and support.

PrimaDonna gives women with large breasts optimum support, a perfect fit and an elegant silhouette – up to a J cup. Our lingerie is the result of expertise developed over decades and boundless passion. An ode to feminine forms and a confidence boost for every woman who has a larger cupsize.

In 2010 Van de Velde launched PrimaDonna’s little sister, PrimaDonna Twist: a lingerie collection with a young style, fresh, trendy prints and lots of padded cups. It was a great success, attracting a whole fan club - and it’s growing every year.

Since the launch of PrimaDonna Swim women with a larger cupsize have been able to enjoy beachwear in the legendary PrimaDonna fit, too.
The bikini, swimwear and accessory line is known for delivering hip, stylish designs, outstanding quality and the very best fit.

PrimaDonna Sport added yet another dimension to the PrimaDonna experience in 2017. Running, jumping, stretching, sweating… thanks to the exceptional fit of this trendy sports lingerie and accessories, all that can be done in comfort and style, with the best support a woman can get.

Every visitor to this web site is requested to take note of the terms and conditions. By the mere fact of consulting this website, the visitor understands, accepts and observes all the conditions and guidelines set forth herein. (http://www.primadonna.com/en/disclaimeren). More information on personal data and our processing activities: http://www.primadonna.com/en/privacy-en